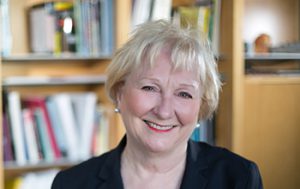 Marshall was named SMRLA CEO in July 1995 soon after independent county leadership replaced a regional governance structure for Southern Maryland libraries. She led the association as it developed a partnership with the county library systems to meet library customers’ needs in one of Maryland’s fastest growing regions.

Under Marshall’s leadership, SMRLA implemented three new major computer systems with the county libraries; greatly expanded materials delivery across Southern Maryland; and developed a robust training program for library staff. Marshall was also instrumental in elevating the visibility of Southern Maryland libraries across the state. She built statewide relationships and secured dedicated funding for SMRLA and the state’s two other regional libraries, along with capital funding for county libraries. Marshall also helped successfully lobby for Maryland to designate libraries as essential community services during emergencies.

Most recently, Marshall led a reorganization of SMRLA to streamline operations and ushered in a new strategic plan to set the stage for future success.

“I am grateful to be leaving SMRLA and the region poised for greater things,” Marshall said. “I am fond of an African proverb that says, ‘If you want to go fast, go alone. If you want to go far, go with others.’ Together SMRLA and the three Southern Maryland library systems have come far. I thank the leadership of the county libraries, the SMRLA staff and our Board of Trustees, and all of Southern Maryland’s wonderful library staff members for their support in providing world-class library services to our community.”

Marshall will remain active in the state library community following her retirement. She was appointed by Maryland Gov. Larry Hogan to serve on the Maryland State Library Board, a 12-member panel that promotes the improvement of the state’s library services.

A nationwide search is underway for Marshall’s replacement as SMRLA CEO.